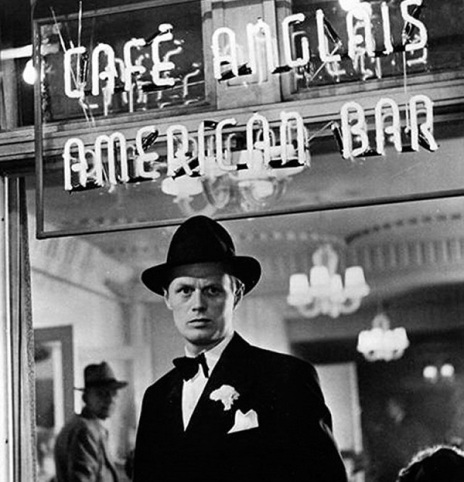 Unarguably the finest British film noir ever made, Night and the City was directed by American Jules Dassin. Its strikingly dark tone may not be unrelated to the fact that Dassin took the project because studio head Darryl F Zanuck had told him he was about to be blacklisted by the McCarthyite House Un-American Activities Committee. No doubt 5,000 miles from Hollywood seemed a good place to be at the time.

The lead, Harry Fabian – played with charismatic, compelling desperation by Richard Widmark – is a small-time con-artist looking to break into the big time. He thinks he has a chance at being a wrestling promoter in London, but the sport is a cartel run by a Greek named Kristo. As soon as we meet Kristo, played by Herbert Lom with a characterisic stillness and steel that seems to simply absorb all of Fabian’s restless energy, we know how the story is going to end.

No-one in the film has much, if any, decency; there is no-one here to root for, not even Fabian’s foolish girlfriend (Gene Tierney) whose indecency is emotional, rather than moral. What kind for person would fall for a guy like Fabian anyway? The great Googie Withers is also memorably venal in a supporting role.

Fabian’s brief shot at redemption takes place on the embankment at Hammersmith right up against the film’s closing titles. Whether or not he is, in fact, redeemed depended on where you saw the movie. In the UK, Fabian was allowed a little dignity to close the movie with; for US audiences, not so much.

Scorsese is a big fan of the film, and its not hard to see why. He was slated to direct the 1992 remake with De Niro in the Fabian role. Perhaps it would have been more successful if he had. As it is, the fight scene in Raging Bull surely owes something to the brutal wrestling bout which is Fabian’s death knell in Dassin’s version.

Night and the City is available from Amazon and other DVD retailers.

The other films I have written about under the Forgotten London Film series are: Pool of London, No Trees in the Street, The Boy and the Bridge, London Belongs to Me, Waterloo Road, Run for your Money, The Happy Family, St Martin’s Lane, and Underground.

One thought on “Forgotten London films: Night and the City (1950)”

Also on my blog

The Favourite: out now in paperback

What I blog about