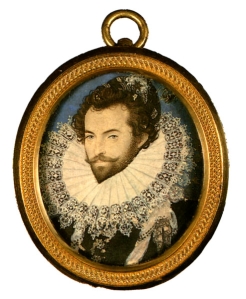 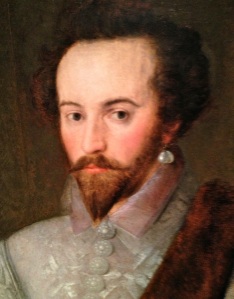 Further to my earlier review of the National Portrait Gallery exhibition, Elizabeth I and her people, I thought I’d just post two contrasting portraits of Ralegh. The first, on the left, is a Hilliard miniature from 1584. The second is a close-up photo I took of the 1588 portrait currently on display at the NPG. (My apologies for the slight lack of focus!)

My first thought when I saw the latter was: what a toll those four years at the heart of Elizabeth’s court had taken on him. One can read too much into these things, but if the earlier portrait seems to capture the brash confidence – arrogance, even – with which Ralegh was and is often associated, the later portrait suggests a man whose self-belief – for all the studied magnificence of his appearance – is not what it was.

3 thoughts on “Sir Walter Ralegh: the price of fame?”