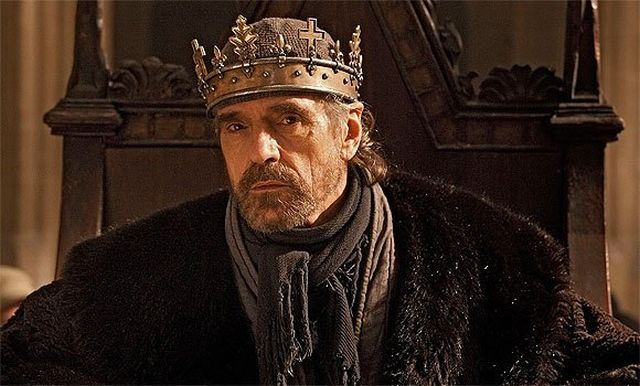 Once again, I was fortunate enough to be invited to a BFI screening of two films in the BBC’s new Hollow Crown season, Henry IV parts I and II, both directed by Sir Richard Eyre. There was a Q&A afterwards in which executive producer Sam Mendes interviewed Eyre and Simon Russell Beale, who stars as Falstaff. I have blogged an account of the Q&A here.

The first thing to say is that, once again, the performances are matchless. Jeremy Irons as Henry IV dominates – no mean feat in a play that also features Falstaff – hollowed out though he is by the burden of the crown. He is a man, as Prince Hal himself notes, eaten away by the responsibilities of power – and by the knowledge of what was done in order for him to claim it. And he is eaten away too by his son’s apparent recklessness and contempt for what Henry has bought so dearly, by the fear that Hal will fail to redeem his Plantagenat inheritance, and throw away all that Henry won. The correlation between the health of the body politic and the health of the king has rarely been more eloquently portrayed.

The casting of father and son actors Alun and Joe Armstrong as Northumberland and Hotspur is a stroke of brilliance. In particular – and not to take anything away from Alan Armstrong – Joe is the best Hotspur I have ever seen. As a rule, I have tended to find the character something of a swaggering boorish dullard, but here the force of the man’s blunt personality was almost intoxicating: high on emotion, with a compelling, passionate, willful charm, he was a genuine counterpoint to the self-contained and withheld Prince Hal.

I have written more about Tom Hiddleston as Hal in my review of Henry V. Again, his piety is subtly emphasised here – we see him cross himself several times – and here it serves to show how wrong Henry IV is when he frets that his son might be as feckless a king as Richard II. The quiet contrast between Hal’s purposeful self-doubt – his spiritual humility –and the religiouse self-pitying sentiment of Richard II is understated but highly effective.

And if Hiddleston seems to play Hal with a cool, insouciant self-contained sense of entitlement, the shocked tears when his father slaps him in the face are thrilling. We are startled to see the mask Hal has made for himself break, so that he is again the frightened, adoring son eager for his father’s approval. It’s a brilliant moment, laying bare Hal’s vulnerability, his frailty, while also further clarifying his relationships with Falstaff and his father, and his rivalry with Hotspur too.

I think of the plays as dominated by Falstaff, but Eyre’s versions – in line with the whole season’s focus on the idea of kingship – place as least as much emphasis on the young Prince Hal’s troubled relationship with his father, Henry IV, as with his wayward, overweight tutor. Inevitably, in reducing the plays to two-hour films much has been lost, and it is perhaps Falstaff and the Boar’s Head that suffers most from this.

Falstaff is nothing if not an expansive character – in every sense of the word – and inevitably to cut him is to reduce him. Falstaff lives a life of happenstance and appetite in a perpetual Now, imagining his world afresh whenever he speaks, reckless of the passing time, and it is his particular tragedy that he pins his hopes for redemption on Hal whose providential destiny is fixed by his paternal inheritance, and who cannot but help betray Falstaff’s dream simply by being party to it.

But Falstaff needs space to spread his charm, which to some extent the edits here deny him. Hal’s betrayal of Falstaff is foreshortened, his slightly bullying, bating tensions with the Boar’s Head rabble foregrounded.

Beale’s Falstaff caught his sly, glancing wit perfectly, and his slow descent into the desperate melancholy of age and failure, but I would have liked to see more of the character’s slow, beguiling, quixotic charm.

I should really also mention Maxine Peake, whose Doll Tearsheet is extraordinary, sliding perfectly between a blunt, angry, brutalised hurt and a tender untouchable humanity.

But there are lovely little moments everywhere here: Henry IV forgetting Walter Blount’s name; Doll Tearsheet being unable to read the papers Hal steals from Falstaff’s pocket;
Falstaff’s own half-wounded, half-stabbing “Depose me?” to Hal as they play-act the king.

Mendes’ stated aim as producer was to make four films, not four films of more-or-less theatrical productions. On that basis, I would say that Eyre’s are the most successful of the four: his films have more confidence and energy in the direction than Goold’s or Sharrock’s: the pace is sharper, the cutting more effective, the camerawork fluid and involving where theirs was more static. It is as if the latter were still too wedded to how they might block a scene for the theatre; Henry V, in particular, seemed conceived in permanent mid-shot.

But the biggest criticism I have of the Hollow Crown is that the same actors did not carry the parts of Henry and Northumberland through from Richard II into Henry IV. I have no argument with the individual actors in either film, but there was a real opportunity to see more clearly how Shakespeare’s characters develop through the films, and moreover an opportunity that is unique to this kind of film project.

When challenged about the decision by an audience member in the Q&A afterwards, Sam Mendes seemed rather defensive, citing scheduling conflicts, noting the period of time elapsed between the plays – in fact, only a couple years – and saying that anyway it wasn’t that important. Well, perhaps not, but given that the stated aim was to create a filmic rather than a theatrical experience, the choice was certainly a regrettable one.

But these are minor criticisms, since the series as a whole is a tour de force of imaginative retelling, and each film is superb in its own right, confident in their own visions of the texts and drawing wonderful, sharply delineated performances out of a glorious cast.

My reviews of the other films in the series are here: Richard II, Henry V. I have also posted an account of the Q&A with Sam Mendes, Sir Richard Eyre and Simon Russell Beale after the screening of Henry IV at the BFI.

7 thoughts on “Review: The Hollow Crown: Henry IV parts I and II”