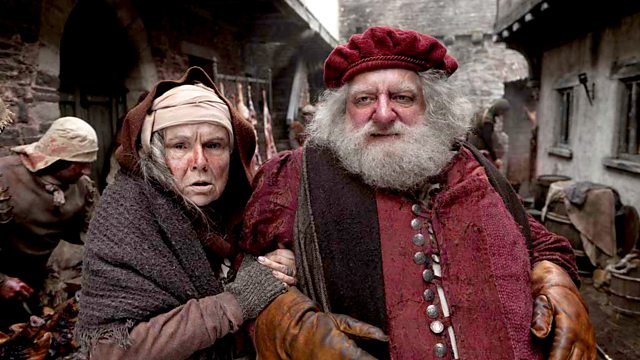 After the screening of both parts of Henry IV at the BFI on July 2 – reviewed here – Sam Mendes led a Q&A with the director Sir Richard Eyre and Simon Russell Beale, who played Falstaff.

Richard Eyre explained that Henry IV parts I and II were his second favourite Shakespeare plays after King Lear, and that he agreed to make the films on the condition that he could cast Simon Russell Beale as Falstaff.

Sam Mendes said that as producer his goal was to make a genuinely filmic adaptation of the tetralogy, rather than simply to film productions of the plays.

Eyre said that in adapting the text the brief he had been given was deliberately vague, being simply to make two two-hour films. He started with a mild reverence for the text, and having made a two-hour film of Lear before, he had a good idea of the kind of word-length that he would need to aim for, and so began work almost on an arithmetical basis. He felt that it helped to physically type out the script himself.

His experience of film-making before – with projects such as Iris – meant that he worked with the kinds of notes one gets from studio executives in mind. In particular questions such as. ‘Hasn’t this scene gone on too long?’. That led him to take Shakespeare’s innovation of cutting between the court and Falstaff’s circle at the tavern – which is already cinematic – a stage further, moving some scenes around to enable him to cut more quickly from one to the other.

The key point was to keep the film moving. Eyre said he turned to his friend Stephen Frears for help on this point, and Frears gave him two useful pieces of advice. First, always be aware of the scene and shot you have cut from to get to this point of the film; and likewise be aware of the scene and shot you are about to cut to. Second, if you can’t move the actor, then move the camera. How do you create a dynamic? Only one scene was shot as a performance, which was the play scene in which Falstaff takes on the role of Hal’s father, the king.

Beale noted the fact that he had done relatively little film work, and said that he found the experience extremely pleasurable, since it gave you the opportunity as an actor to localise emotions and performance precisely scene by scene in a way that is impossible in the theatre.

Eyre said that film making is 90% preparation and 10% inspiration. The two films were shot over just nine weeks. He used a two camera set-up throughout, one of which was a steadicam, so that he always had the options to switch from one to the other immediately with no break in the filming. Whereas on most shoots, the various aspects of production – make-up, lighting, production design and so forth – worked in isolation, he was very keen to ensure that it was fully collaborative from start to finish so everyone was aware of what the others were doing. Much more like the theatre, in fact.

Beale said that he had marvellous make-up and costume for the role, which, as soon as he had put it on, felt like 90% of the work of creating the character. Falstaff’s internal life is oddly elusive, he said. Falstaff soliloquises about other things – honour and drink and so on – but not about himself; we don’t hear what he feels. His feelings for Hal are likewise a mystery.

Beale said he came to the set somewhat scared given the elaborate language which Falstaff speaks, but also comforted by the fact that he has known men like him, who love to pontificate but who lead the unexamined life. Indeed, he said, the theatre used to be full of them.

Eyre said it was important in portraying Falstaff that he did not represent the heart of Merry England, as some literary critics liked to argue. Beale said that you don’t make moral judgements on your characters, but that nevertheless Falstaff was – ironically – a little man, a pub bore, a shit. Eyre added that Hal and Poins are also shits.

Beale noted Shakespeare’s ability to wrongfoot you, so that it is never clear what your reactions should be to any given scene.

He said the only cut he missed from the play was Falstaff’s line “I used to be thin”.

Both Eyre and Beale were full of praise for Tom Hiddleston, both as an actor and a man. Eyre revealed that he had been telling Hiddleston’s mother earlier how well mannered her son was on set, which he said was important and helpful. Both commented on Hiddleston’s memory, Beale noting that taken together, Hal/Henry V is the biggest part in Shakespeare, and Hiddleston was word perfect on both.

Eyre was asked about a wider theatrical distribution for the films; he replied that it broke his heart that there wouldn’t be one.

My reviews of the films in the series are here: Richard II, Henry IV, Henry V.

3 thoughts on “The Hollow Crown: Q&A”